A friend of literacy; 2 sisters on a lobster roll (Robin’s Nest) 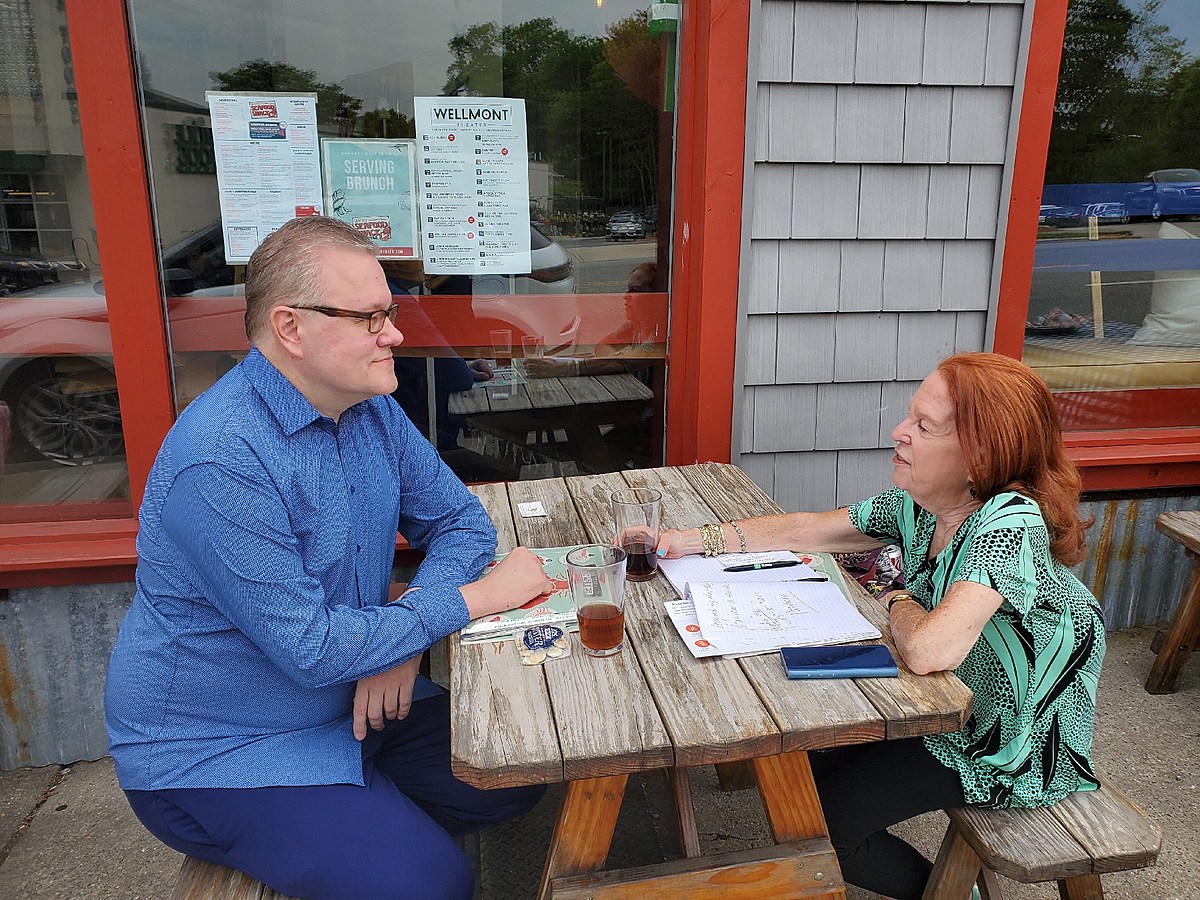 There is no shortage of people who live in our city and dedicate time to volunteering for causes they believe in and that benefit us all.

Ilmar Vanderer is a prime example of a man with a passion for making Montclair more historic, more beautiful, and even more fun. It was an excellent interview, because he likes to discuss as much or more than me; it is full of information and anecdotes.

Ilmar’s family originated from Estonia in Europe, across from Finland on the Baltic Sea and was once part of the Soviet Union. He has lived in Montclair all his life. His parents were World War II refugees, who moved to Sweden, Canada, then the United States and Montclair more than 50 years ago.

Ilmar spoke Estonian at home and first attended the Nishuane School, where he learned English through the school’s ESL program. He preserves his Estonian heritage and culture by serving on the board of directors of Lakewood Estonian House, known as Lakewoodi Eesti Maja in his native language.

It is a place to enjoy the special dishes of childhood and celebrate Estonia’s Independence Day in February and Independence Restoration Day on August 24, which started in 1991 after independence. of the country of the Soviet Union.

His love of reading and literacy is demonstrated by his co-founding of Friends of the Bellevue Avenue Library, a 501(c)(3) nonprofit organization dedicated to keeping the Bellevue Avenue branch open and alive. FBAL works in collaboration with the Montclair Public Library and library administrators, as the library continues its second century of service to the community.

The branch reopened in 2021 with limited service due to pandemic closures, and is once again fully operational and ready for those who love to read or need to use computers for work or play.

Ilmar, the organization’s president, said, “Reading is literacy and promotes who we need to be, for children and adults. Libraries are much more than books. I’m a cheerleader and I stand up for the library and all the good that the library does for us.

Mark your calendars for musical Mondays, which will begin in mid-July on the outdoor esplanade of the Bellevue branch. Plans include extending broadband service to the outdoor plazas of both libraries.

Ilmar’s love for historic preservation was passed on to him by his architect father, as evidenced by his interest in the grounds and buildings of the First Ward. It received the Montclair Historic Preservation Commission’s Conservation Award in 2021.

He is an avid Bellevue Theater enthusiast and volunteers using his local consultancy firm, The Word Is Out Communications, providing public relations and promotion to help reopen the revamped and updated site later this year. Look for a sign outside that says, “Coming Soon. A theater near you,” a slogan he said was the witty idea of ​​Deputy Mayor and First Ward Councilman Bill Hurlock. I checked with Hurlock, and he said, “That’s my quote, okay.

If that’s not all, Ilmar also sits on the steering committee of Montclair Library Friends, which provides information on services offered and community volunteer programs. In his spare time, he enjoys traveling and watching classic horror movies, especially those starring Boris Karloff.

He is currently leading a digital marketing campaign for expanded theatrical screenings and the DVD release of the 2021 documentary “Boris Karloff: The Man Behind the Monster.” He is an altruistic humanitarian with many interests, always on the move.

There was no way for me to pass easily or wittily from lobster literacy, so I’ll just skip here. Who doesn’t love lobster and shellfish? I do, and there’s a new place in town, Mystic Lobster Roll Co., that serves fresh, delicious, made-to-order food.

Two sisters, Amanda and Amy Barakat, first tried to open their business on Valley Road almost a year ago. While waiting for the necessary inspections and licenses, it looked like they would never see their dream come true.

On June 11, 2022, they finally held their grand opening at 145 Valley Rd. and are working seven days a week to spread the word, fill lobster rolls, and prepare many other items on their menu.

Amy is Amanda’s older sister at just 22 months, and the two make a perfect team. It’s a long drive to Montclair from her home in Jackson Township, but she drives here at least two days a week.

Mystic Lobster Roll Co. is part of a small franchise, with the first store opening in The Brick. Amy said: “My family had a seafood and meat market on Long Beach Island so I grew up in the area. We started selling lobster rolls there and I got hooked. trained by doing different combinations. I love lobster.” I was shocked when she told me, “I had never had a lobster roll until I tried one at another store.”

Amanda lives in Belleville and attended Widener University in Chester, Pennsylvania, where she studied hospitality and catering. As part of her course, she had to take cooking classes, including pastry.

She said: “I don’t like to cook, and I’m terrible at it. I’m good at mixing decomposed and shelled lobster together to make our classic rolls, like the Maine, with lobster meat mixed with mayonnaise, and scooped into a lightly buttered roll Each order is carefully weighed and measured for portion consistency.

The two sisters prepare the orders, and Amy is also in charge of information technology and their social media accounts.

They are full of enthusiasm and positivity, with plans to add more shrimp to the menu, as well as the Mighty Mystic with double the lobster, Mystic meal combo deals and a special Date Night choice with two lobster rolls, two servings of soup and two pieces of pie.

For now, they only offer key lime pie, but they are considering partnering with a local ice cream company and adding chocolate and fruit pies to the menu.

I can’t forget Canaan Dees, store manager, who greets everyone with a big smile. It’s full of raw energy and chatter, which helps you pass the time while waiting to pick up your online order or place one to eat inside at the counters or at one of the outdoor tables.

He said: “I’m learning the trade working here and figuring out how to run things from the front of the store to the back in the kitchen.”

I was charmed and amused by Canaan, who comically wore a lobster costume as a walking advertisement in front of the store during the grand opening. I gave him a new title, The Lobster Jester, which suits him well with a T.

The dedication and love for what they do is evident in this business, and I thoroughly enjoyed my order of shrimp and corn chowder when I got home. The interview is interesting, hard and hungry work.

Robin Woods is a local town girl, writing about activities, shops, restaurants, and interesting people that catch her eye. She has written memoirs and personal essays, as well as music and fashion columns for various New York newspapers. Her writing awards include the Shirley Chisholm Award for Journalism and the Essex County Legacies Essay Competition Director’s Award.