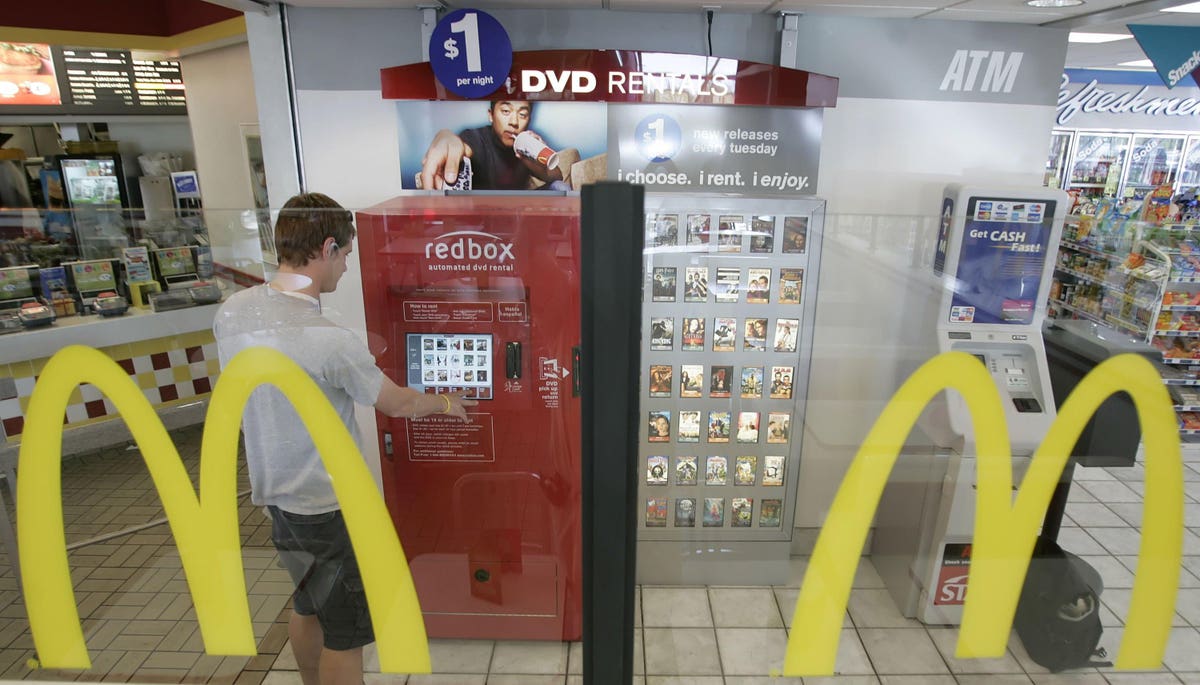 After posting Adjusted EBITDA (Earnings Before Interest, Taxes, Depreciation & Amortization) of -$15 million in 2021, compared to $114 million in 2020 and the outlook for 2022 does not look positive, Redbox is sold for a song at Chicken Soup for the Soul, the owner of Crackle in a $375 million deal.

Management tried unsuccessfully to switch from renting DVDs through kiosks to streaming content on demand. Now the struggling company is selling itself in an all-stock deal to a company that successfully cracked the code to launch online video services.

It’s been a long journey for Redbox Automatic Retailer, LLC, which was founded in 2002 by McDonalds. They sold 47% of the company to Coinstar for $32 million in 2005, which then increased its stake to 56% via the exercise of options. Then, in 2009, Coinstar’s parent company, Outerwall, bought the remaining 44% stake from McDonalds for $167 million.

It was privately owned by Apollo Global Management
in 2016 when Apollo agreed to pay $1.6 billion for Outerwall or $52/share, a 51% premium to where the stock was trading before the announcement of the merger-acquisition. Apollo is still a shareholder of Redbox.

At first, the company capitalized on the DVD boom by becoming a cheap and convenient alternative to DVD rental stores by setting up kiosks (it now has about 38,000) in retail stores and renting DVDs at low prices. price. This was seen as a win-win by many retailers, as it brought customers searching for movies in grocery stores and other retail outlets.

However, as DVD sales and rentals plummeted, the company struggled to reinvent itself as VO.
platform D. It now has 40 million customers in its loyalty program. This is a mix of Redbox Kiosk customers, those who watch its Free Live TV platform which broadcasts 130 digital channels, TVOD (transactional video on demand, essentially pay-per-view (PPV) over the Internet) and PVOD ((Premium Video On Demand) which is similar to TVOD but in an earlier window after theatrical release).

Despite all this expansion into new forms of watching movies and TV shows online, it posted a loss in 2021 of $141 million on $289 million in revenue, which fell nearly half from to $546 million in 2020.

Flash forward to 2022, and Redbox went public again last October via a merger with a special purpose acquisition vehicle (SPAC) called Seaport Global at a valuation of nearly $700 million.

It is now being acquired by Chicken Soup for the Soul in an agreement where shareholders will exchange shares in the publicly traded company at a ratio of 0.078 CSSE share for 1 RDBX share, valuing equity at approximately $50 million, with Chicken Soup also assuming approximately $325 million in debt.

Redbox shareholders will only own 23.5% of the combined company after the merger closes. CSSE said it expects the acquisition to be accretive next year, with $40 million in cost synergies and expects to end the year with revenue of over $500 million and adjusted EBITDA of $100-150 million.

Fusion is an advertising video-on-demand (AVOD) game, with Chicken Soup for the Soul management saying the combined companies will have one of the largest independent ad-supported VOD platforms. “Today marks a transformative moment for Chicken Soup for the Soul Entertainment and an inflection point for the ad-supported streaming industry,” said William J. Rouhana Jr., President and CEO of Chicken Soup. for the Soul Entertainment, in a press release. “Our acquisition of Redbox will accelerate the scale of our business as it combines complementary teams and services to create the streaming industry’s first independent AVOD,” he said.

The merger deal brings a sad end to what was once seen as a high-growth VOD provider targeting low-income customers with VOD (the fastest-growing partner to install kiosks has been Dollar Stores).

At Redbox investor meeting last yearmanagement appeared quite optimistic about the future.

It was started by Galen Smith, who has been the CEO since 2016, when Apollo Global Management took it private. Prior to that, he was at Outerwall, who owned Redbox, for a number of years in a variety of roles.

At the time, the company was just merging with SPAC Seaport Global at a valuation of $693 million, at the time considered a low multiple of 3.6 times the forecast 2022 Adjusted EBITDA of $193 million. dollars, which, in hindsight, is likely to turn out to be extremely optimistic. Actual EBITDA was -$15m in 2021 and the outlook for 2022 is not positive.

The projections were based on converting its 39 million loyalty club members into VOD users, and Galen Smith said digital transformation was already underway and newsstand business would continue to grow.

Jason Kwong, Chief Strategy and Digital Officer, added, “So, as Galen has mentioned before, our strategy is not just a blueprint for a digital future. This is something we are already performing today. The TVOD or Redbox On Demand service, we launched it a little over three years ago at the end of 2017. We see that this activity is developing well. We launched a free live TV channel service FAST in February last year. We launched the free on-demand component – the ad-supported on-demand component – in December last year. And then premium SVOD channels, giving customers the option to subscribe to premium third-party channels, which will arrive in the second quarter of next year.

He also noted that competing SVOD services have a cost per acquisition (CPA) of $100 to $200 per customer, while at Redbox it only costs them $8 to acquire a customer. Despite these bullish moves, in the end, the company simply wasn’t able to offset the rapidly declining newsstand revenue with new revenue streams. It’s a problem that newspapers, magazines and other mainstream media companies have struggled with for more than a decade.