DIVE PLATFORM: “Interceptor” is not the fun kind 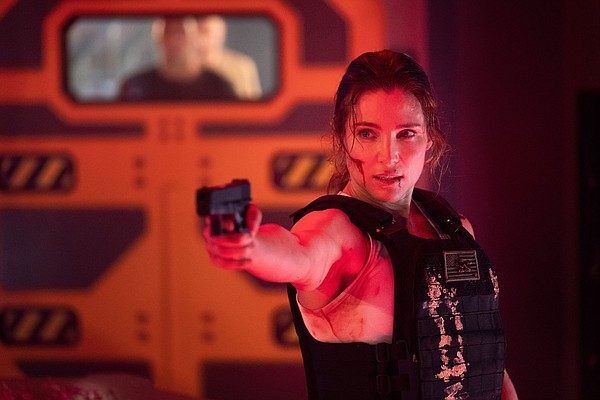 I have a confession to make. When I first saw the trailer for Netflix’s new action movie offering, I suspected it would be a bad movie. But I was hoping it would be kind of bad fun and cheesy. This was not the case.

“Interceptor” is a dull, cliched wrapper of an action movie with few redeeming qualities. And I hate to write that about Matthew Reilly’s movie because it’s his first time in the director’s chair.

The film begins with some basic “facts” about US defenses if Russia decides to launch a nuclear missile. Apparently, the United States has two interceptor facilities that launch their own missiles to counter any nuclear missile. One is Fort Greely in Alaska. The other is a remote platform based in the Pacific Ocean called SBX-1.

These defense systems have only 12 minutes after the launch of a nuclear missile from Russia to intercept them.

Within the first few minutes, Fort Greely is taken offline, though the film mostly reveals this through an outgoing radio call for help. I wondered why we didn’t have scenes of that attack, and then I read this line from an article on the Australia Broadcasting Corporation website, “So in 2017, Reilly sat down to write a script that he could direct. Something that could be done for less than $15 million.”

Well, there it is. Cinema is a business, as my editor often writes. Although that would be tantamount to eliminating the opening scene of “Armageddon” and simply relaying that a shuttle has exploded and New York has been hit before switching to Bruce Willis chasing Ben Affleck through an oil rig with a hunting rifle. It would lose some impact, maybe even deep impact (heh).

Captain JJ Collins (Elsa Pataky) arrives aboard the SBX-1 and doesn’t seem thrilled to be there. Some personnel even apologize for his situation, and the film hints that something bad happened to his military career.

“Interceptor” continues with 16 nuclear missiles stolen from Russia (one way or another), though we don’t get any of those scenes either. In fact, Mother Russia seems pretty relaxed about the disappearance of these super weapons.

It is then that the janitors of SBX-1 pull out their guns and shoot the commander of the facility, revealing that they are terrorists in disguise. One wonders how six or seven terrorists were able to falsify identities and gain access to a top secret US military site, but that too is not shown to us.

After a brief firefight, Collins seals himself in the rig’s command center with two other soldiers (one unconscious) and proceeds to defend America’s last hope from nuclear disaster.

It is here that the evil mastermind reveals itself in the form of a man named Alexander (Luke Bracey). Though his motives are far from clear, even after the credits roll. It’s about having a rich, corrupt dad and how America failed…sort of. Like most plotlines in the film, Alexander’s motivations don’t quite seem to hold up.

“Interceptor” ultimately reveals that Collins was sexually harassed in her post, though the few awkward and stilted scenes that show it make Michael Bay look like a genius at subtlety. Collins raised the issue with superiors and the attacker was removed from his post. But she was harassed by other members of the US military, receiving death threats and finding her room destroyed.

Reilly knew he had a low budget and no big talent for his film. He must have known it was a nonsense story. To make up for all that, he should have taken “Interceptor” into maximally corny territory, something like “Demolition Man” or the original “Total Recall.”

Collins really pumped himself up for the role, training with hubby Chris Hemsworth, yeah, Thor. And she looks like an action hero who can take on brutal fighters. I’m sure if paired with a well-written script and an experienced director, she could be a solid action heroine. But none of that comes up during “Interceptor.”

I enjoyed exactly two small parts of this film. The first was a beheading involving barbed wire. The second was Hemsworth’s initial cameo.

The fight choreography is passable to slow, the gunfights are forgettable, and the dialogue feels like it was written by a progressive buzzword generator.

I wish I had more good things to say about this movie. Having been on a film set before, I know how hard it takes to make a production. But I’m not even sure Walmart would put that in a $5 DVD basket, and that’s taking inflation into account.

“Interceptor” is available on Netflix today, but I recommend hitting the theater to watch “Top Gun: Maverick” instead. A discounted matinee should be available now.