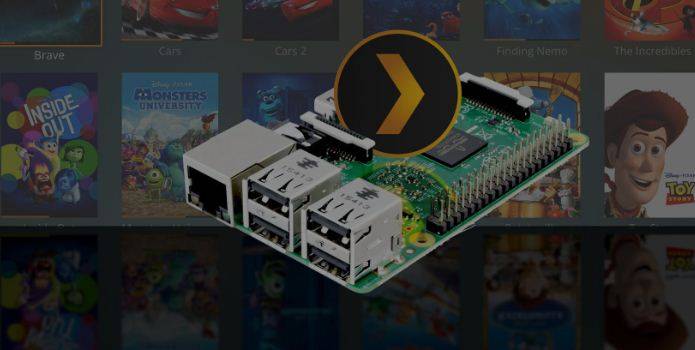 The Raspberry Pi is a General Purpose Single Board Computer (SBC). The small, credit card-sized computer can handle a variety of tasks, from a simple Linux desktop to a smart home hub, VPN server, and a host of other projects. Due to its small size, affordability, and good value for money, the Raspberry Pi is a competent media server like Plex or Emby.

Plex is a media server application. You can think of it as a DIY Netflix. Instead of subscribing to a service and paying to stream content, you provide digital movies, TV shows, music files, and photos (legally acquired). Plex then organizes that into a neat User Interface (UI) with skins and descriptions. It is a great way to host your DVD or Blu-ray recordings in one place so that you can access them from any place where you have an internet connection.

Perhaps the most recognized name on this list, Kodi is available for the Raspberry Pi.

While the best days of Kodi are no doubt behind us, there are several Raspberry Pi versions of the Kodi media server available, including full distributions like LibreElec and OSMC. LibreElec is available for Raspberry Pi 4, but OSMC is currently not available beyond Raspberry Pi 3. However, you can also manually install Kodi on an existing Pi operating system using:

But wait a minute. Aren’t Kodi-based media servers actually media centers? Well, that’s both, that’s how they get on this list. Providing DLNA / UPnP means that Kodi (and its forks) can be used as a media server.

If you’re already using a Kodi-based distro, you don’t need a media server because you already have one. To activate it, open Settings> Services> UPnP. Here, enable Share video and music libraries via UPnP.

With support for custom extensions and Python, JSON-RPC, and JavaScript APIs, Mopidy is more than just a music server. Potentially the most powerful Raspberry Pi music server available, it can play songs from:

In the attached video, Mopidy is installed on a Raspberry Pi built into a retro cassette player. With the buttons and volume connected to the Pi’s GPIO, audio playback is done through a custom Mopidy extension. NFC tags on cassettes request specific Spotify playlists to be played.

It’s true that closer to a NAS than a media server, OpenMediaVault is the smart choice for Pi owners who want to access their media files from any device on the same network. The configuration is simple, but long. You may have initial problems mounting the hard drives you have connected to your Pi. However, this should be overcome quickly, allowing you to properly configure the system.

OMV features include UPS support (uninterruptible power supply) and statistics to aid in system monitoring. It also supports EXT3 / EXT4 / XFS / JFS file system and RAID can be configured for hard drive mirroring. SSH, FTP, TFTP, SMB and RSync are supported for direct connection to your OMV device. You will usually access it through a web browser, however, by opening the IP address.

There are also several plugins available for OMV, such as a USB backup function and other tools to extend the functionality. Once fully installed and configured, you’ll have your very own Raspberry Pi home media server out of the box.

If you’d rather just stream from a desktop PC or dedicated media server to your Raspberry Pi, try Plex. A popular name in home media streaming, Plex can be used to stream content to all kinds of devices.

Thanks to the popularity of Plex, you will be able to enjoy media streamed through Plex on a wide selection of devices. Mobile apps are available for Android and iOS. Meanwhile, media streamers like Apple TV, Amazon Fire TV, and many smart TVs also have Plex clients. You’ll even find clients for current and next-gen consoles, Windows, macOS, Kodi and even models up to the Raspberry Pi 3.

Note that Plex requires its files to be named in a specific format. This allows the software to extract the appropriate metadata from the web. By doing this, you will get details about the media files in your library, for example album or DVD covers, track listings, etc. This support page on the Plex website explains the organization and names of the files.

As it stands, Plex should be your first choice for a Raspberry Pi media server. Use the Plex Media Server version for Raspberry Pi for best results. And remember, you can also subscribe to Plex Pass for even more features.

Described as the Raspberry Pi’s “Swiss army knife of music streaming”, the Pi MusicBox is a Raspberry Pi music server that streams audio in the cloud to a connected speaker. Audio can come from Spotify or other online services, or from local or network music on your NAS. There is also support for TuneIn and other web radio services and iTunes podcasts.

Pi MusicBox supports USB audio, as well as wireless connectivity with Spotify Connect, AirTunes / AirPlay and DLNA streaming. This means that the music streamed through your Raspberry Pi can be played on any mobile device, tablet or Smart TV. Unfortunately, the Pi MusicBox hasn’t been updated since 2019. However, it’s based on Mopidy (above), so if you’re looking for a preconfigured Mopidy solution, give it a try. Learn more about the software at www.pimusicbox.com.

Turn Raspberry Pi into a media server with Emby

Emby also adds DLNA support to the Raspberry Pi to simplify streaming content to and from your server. Several options are available to install Emby. The simplest solution is to use DietPi’s low impact Raspberry Pi distro. Once this is installed, you can simply select the Software Optimized menu option and then Emby Server.

Final words: how to set up a media player and a Plex server with Raspberry Pi