Is the West End going bankrupt because it woke up? Written CHRISTOPHER HART 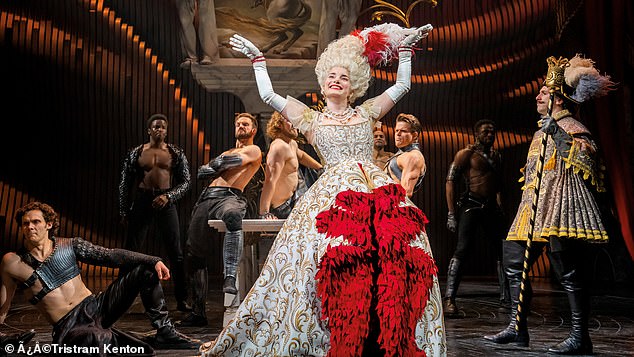 London and provincial theaters are in dire straits. Many are half-empty night after night, and some don’t even bother to open the upper circles because so few tickets are selling.

What is happening ? Covid hasn’t gone away completely, but it is much diminished. Masks should no longer be worn. And professionals confidently expected a huge post-pandemic resurgence. But that just didn’t happen.

“The brutal truth,” lamented one theater critic last week, “is that the many shows that pre-lockdown sold out are playing to empty seats.”

One of the reasons she suggested was the lack of Asian tourists due to Covid. More compelling is the cost. The article was illustrated with a photo from a recent production, showing two handsome young actors in a romantic clinch, with the solemn caption: “Taron Egerton and Jonathan Bailey in ‘Cock'”. 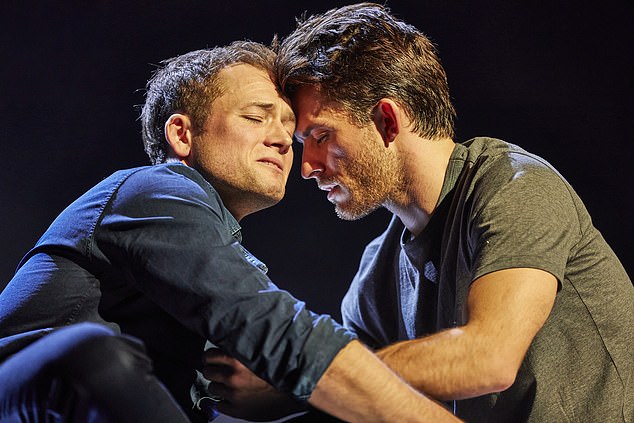 Taron Egerton and Jonathan Bailey in ‘Cock’, a production where top seats sell for over £200 per person

The best seats for the immortal ‘Cock’ – which lasted just 90 minutes – were £217. Meanwhile, there are seats emptying at the new production of My Fair Lady at the London Coliseum, and even the musical Frozen. And when Andrew Lloyd Webber announces that his new Cinderella will close early June 12, you know things are serious.

That’s because a lot of modern theater isn’t good. The malaise that now afflicts him has nothing to do with Covid, and everything to do with the destructive culture wars that devour so much of our familiar artistic landscape.

The demise of our theater parallels exactly how the new Woke Hollywood has “reimagined” Star Wars, Disney stories and Marvel characters, to produce flop after flop.

And “Go Woke, Go Broke” is just as true on Shaftesbury Avenue as it is on Sunset Boulevard. A bit of fashionable political posturing on the fringes, in the student theater or at the very trendy Royal Court Theater in Sloane Square, one of London’s wealthiest areas where they like to play being terribly left-wing, won’t bother you. -be not.

But even the mainstream, the great happy musicals, are now disfigured and ruined by woke opinions and values ​​that have been misguided willy-nilly. Can we just have a regular, non-preaching version of a play or musical? Just for entertainment? “No, you can’t,” seems to be the scolding response.

Worse still, this new censoring ideology – really no more than a strident mass of opinion – seems incapable of creating its own fresh works. Its followers can only parasitize and cannibalize the old repertoire, turning much-loved classics into mere vehicles for articulating their own points of view.

Depressing in its negativity, breathtaking in its bubbling selfishness, modern theater is thus destined to produce plays about as enthralling as a two-hour sermon.

Because that’s often pretty much what they are.

Lloyd Webber’s Cinderella is a shining example. Prince Charming is gay. Eventually he runs off with a handsome duke, and Cinderella ends up with another guy named Sebastian.

Needless to point out that British audiences have no problem with gay storylines – since the 1890s we’ve chuckled at the sly and extremely camp humor of Oscar Wilde’s The Importance Of Being Earnest. The problem is that Lloyd Webber’s Cinderella is terribly misjudged. 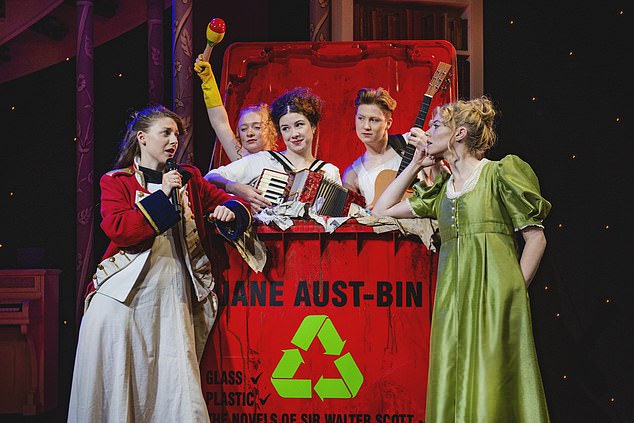 Pride and Prejudice has a rather modern version, with recycling bins and lots of feminism 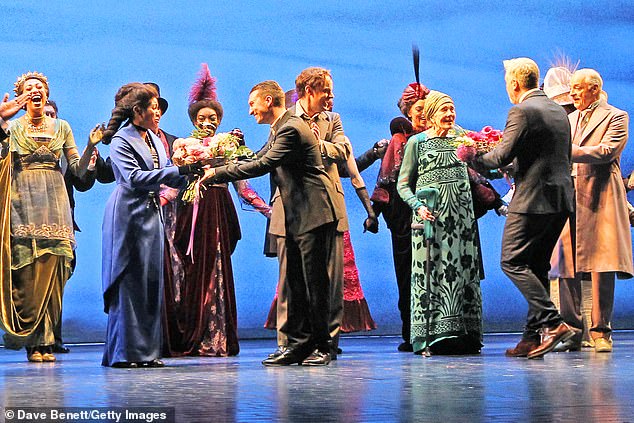 The cast receive flowers at the opening night of ‘My Fair Lady’ at the London Coliseum on May 18, 2022

It ruins the ancient, archetypal folk tale of the poor girl with a heart of gold who is ultimately rescued by a handsome prince, and turns it into a lesson in . . . one thing or the other. But that shouldn’t be a lesson in anything. It should just be fun.

There was more challenge and excitement in a new version of Jane Austen, called Pride And Prejudice (Sort Of). It’s all-female – no Mr. Darcys allowed; it’s “unique and daring”, in its own rather self-approving description; and that includes such groundbreaking moments as Elizabeth Bennet rejecting Mr Collins’ marriage proposal by telling him to “F*** Off”. So original my dear! And guess what? It also closed early and went on tour.

In Mel Brooks’ hilariously bad-taste 1967 satire The Producers, two corrupt theater impresarios hatch an elaborate scheme to make money by deliberately putting on a musical so terrible it’s doomed to fail. . The musical is titled Springtime For Hitler: A Gay Romp With Adolf And Eva At Berchtesgaden.

To look at today’s theater, you would sometimes think that its main creators were actually inspired by Mel Brooks’ film.

What about the recent play, Sylvia, at the Old Vic? A three-hour feminist hip-hop musical about suffragette Sylvia Pankhurst, with an almost all-black cast playing the historically white characters – including Winston Churchill.

Of course, the trend of blind racing can be successful. Take the musical Hamilton, for example, with young black, Asian, Latino and mixed-race actors playing America’s white founding fathers, or the Netflix series Bridgerton.

My concern is that it quickly became awfully predictable in theater, and when you start modifying real characters for free – for fun – audiences don’t buy it.

There was a new Oklahoma! at the Young Vic just down the road from Sylvia, “re-orchestrated and re-imagined for the 21st century”, we were ominously told.

Audiences were promised – sorry, ‘trigger warned’ – “vast amounts of blood and violence, sudden power outages, flashing video images, disturbing themes including mention of suicide and an implied act of aggression sexual”. Makes you laugh for a minute, doesn’t it?

Now, why wouldn’t you want to fly to London and pay £65 a ticket to see this delicious confection, rather than stay home and watch the Oscar-winning 1955 film on DVD?

Sometimes a top creator dares to think outside the box, to be independent of thought – and is ruthlessly twisted.

Take Terry Gilliam, late Monty Python, still more anarchic than Lefty. In fact, the BBC’s own comedy controller (is it me, or is that phrase slightly…Stalinist?) said he wouldn’t order something like Monty Python today, featuring ” Six white dudes from Oxbridge”. Whether it was funny or not didn’t seem to be the issue.

Terry Gilliam got in trouble when he said in an interview that he was “tired of white men being blamed for everything that’s wrong with the world”. He even attempted a joke: “When I announce that I am a black lesbian in transition, people are offended. Why?’

Wokes don’t make jokes, and you have no right to be tired of white men being blamed for everything. Next thing we know, Gilliam’s new musical production at the Old Vic has been cancelled, due to ‘staff unease’, and he had to move it to Bath for the opening.

All of this leaves the culture vultures among us – who really yearn for a good book, movie or play – feeling half-starved all the time.

Or do you accompany a new production with that familiar feeling of anticipatory dread: what new indignity will be heaped onto a Shakespearean masterpiece or a favorite musical this time around?

Nevertheless, amidst this dismal scene of artistic incompetence and creative exhaustion, there is one bright spark: and that is that these horrible theatrical productions are failing. Basically, the theater is a business like any other, and if it doesn’t make a profit, it dies.

The theater simply needs to change: because the general British public is clearly unwilling to pay more for the privilege of being preached.

For all of these comically appalling examples of bad theater, so maybe, just maybe, we’re seeing something like the beginnings of a cultural revival.