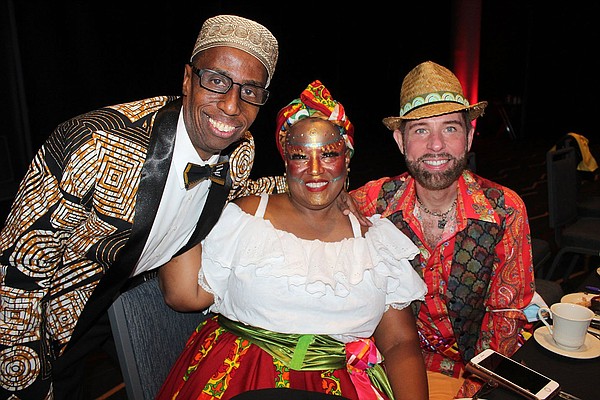 Stephen’s gift made room for him again.

The only sad thing is that in this event a complaint of my life played out again: funny people always walk away.

This seemed to be the case when I was in school. The cool classmate you made close friends and fond memories with would be taken away by parents who took better job opportunities elsewhere, broke up, whatever.

It was a job opportunity that claimed Stephen K. Stone, my instructor and partner in the 2021 edition of Little Rock’s popular charity dance competition, Dancing With Our Stars. Stephen, whom I jokingly call my “dance husband” ever since that contest, has become a very dear friend of Dre and mine.

Stephen was a dance teacher at my alma mater, the University of Arkansas at Little Rock. He had had a number of previous positions teaching dance; his stay in Arkansas had been the longest of his career. At the time we met, he was in his twilight days at college, as she had made the decision to discontinue her dance program. He’s now beginning his next adventure, teaching dance at the University of Wisconsin…a state whose name has stuck in my head due to its recurring reference in “2012”, the mega-disaster/end-of-the-century movie. world of 2009 that Dre watches every time it airs on TV even though we have the DVD.

I love dancing, but before competition, the closest dance I had done by “partner” was freestyle dancing, in nightclubs or special events, with my husband and other guys who positioned in front of me and also did their own thing. I had harbored many daydreams about performing a modern dance routine with a faceless partner. This daydream was kinda cut short during a group salsa class a few years ago, when I was paired up with a dour “partner” who made no attempt to hide his disappointment that I didn’t. wasn’t already fit to take part in the world salsa championships. . I turned away from any other lesson of this kind.

But while covering Dancing With Our Stars for this journal’s High Profile section, I had taken a liking to the Children’s Tumor Foundation’s annual benefit, which helps people living with neurofibromatosis. Based on ABC’s “Dancing With the Stars,” the late-summer pageant features competing local personalities performing dance routines with local instructors in front of judges and an appreciative crowd. This year’s event took place on Thursday (congratulations to whoever won!).

Long story short: I went from being the cover of Dancing With Our Stars to being a judge for the 2020 contest, a virtual event where we met in the studio and watched videotaped dance routines. In 2021, I was asked to participate in what would once again be a live event. I said yes, both honored and petrified.

My first meeting with Stephen, my assigned instructor, was via a Zoom call. To my relief, he was quite affable. He interviewed me about my preferences in music and dance style. I told him that I had a love for Afro-Latin/Cuban/Caribbean dance, especially since I was a fan of Zumba. Next, I revealed how much I love Gloria Estefan’s early hits, “Conga” and “Rhythm Is Gonna Get You,” both of which could get me out of a sickbed to dance. A fan of Estefan himself, he suggested a routine of the latter song.

We scheduled our first rehearsal at the beginning of July. Struck by the lazy summers and what I did, I was slightly apprehensive about the start of rehearsals.

Which seems strange now. We got on well and fell into a routine of rehearsing twice a week during the summer. My fears of failing the “real” dance with a partner were dispelled, thanks to Stephen’s kindness, patience, way of using down-to-earth metaphors to describe various dance steps and how to perform them , his dedication, his sense of humor (and , ahem, his appreciation for my twisted sense of humor) and his praise. I thought like a dancer, he said.

During the rest, we sat down to discuss everything and nothing. Knowing that he was concerned about what would happen after his work was done, I sent him Proverbs 18:16, the Bible verse that says a man’s gift makes room for him.

We didn’t win the contest, which was held on September 9 last year, but we wowed the crowd…and I did win a friendship. I felt like I had known Stephen forever. And when Dre met him, he immediately liked him too.

The three of us got together for several dinners and outings over the months. (Stephen either really liked my cooking or was a really good liar.) And the three of us would talk about this and that. Dre and I cheered him on as best we could — while simultaneously dreading his departure — as he searched for the next dance professorship, a search that stalled for a while before the University of Wisconsin took a bite. ultimately.

“Hard to find friends like that,” Dre has repeated many times since we last met Stephen, two days before he flew away.

We promised each other to keep in touch and, if possible, to exchange visits. (Dre and I have previously stated that any tours we do in the North should be during the warmer months.)

Meanwhile, I remember the end of “2012”, when actress Thandiwe (formerly Thandie) Newton’s character, Laura Wilson, reads aloud from a book written by the film’s main character, Jackson Curtis. In the last sentence of the book, Curtis concluded that “in one way or another, we all have relatives in Wisconsin”.

Friends too, it seems.