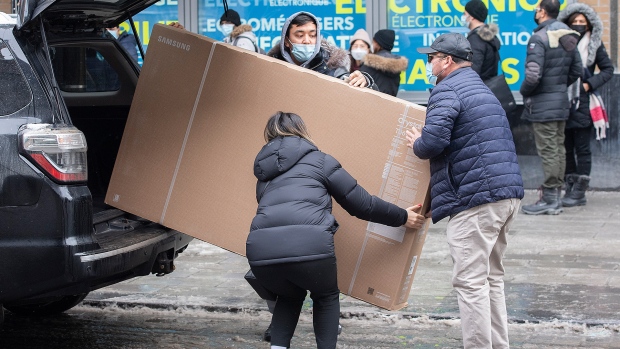 TORONTO – Bargain hunters found reduced sales and smaller government-mandated crowds as they headed for a second Boxing Day in a pandemic on Sunday.

Canada’s two most populous provinces had implemented 50 percent capacity limits for the second biggest shopping day of the year, which somewhat spoiled the consumerist festivities.

A queue had formed in front of the Hudson’s Bay building in downtown Montreal even before the doors opened at 11 a.m., and Etienne Paquette and Emilie Provost were among the first customers.

“We tried to get there early to see what the situation was like,” said Provost. “After all, it doesn’t seem to be that bad, it’s crowded. We are really happy to be able to continue our tradition.

Paquette said if the streets had been more crowded they would have gone home and ordered online instead.

The Eaton Center in downtown Toronto, meanwhile, opened at 8 a.m. on Sunday.

The province of Ontario reported 9,826 new cases of COVID-19 on Boxing Day.

“Due to the new variant, I think today we will see a significant shift towards online shopping,” she said.

Opher Baron, who teaches operations management at the University of Toronto’s Rotman School of Management, said he noticed fewer Boxing Day promotions this year – potentially due to related supply chain issues to COVID-19.

“There are delays in the supply chains so there is a little less stock that people want for the holidays.” he said on Sunday.

Stores have been making deals since November because “businesses are trying to smooth demand a bit,” which is why fewer people were lining up in malls on Sunday, he said.

But Baron said shopping continues to offer escape and relief as Canadians pass through another pandemic wave.

Karl Littler of the Retail Council of Canada had said earlier that capacity restrictions in at least six provinces – including Ontario and Quebec – could potentially deter customers.

This report by The Canadian Press was first published on December 26, 2021.

– With files from Christopher Reynolds, Frederic Lacroix-Couture and Virginie Ann in Montreal, and Danielle Edwards in Halifax.