Review of the 2021 GMC Yukon Denali 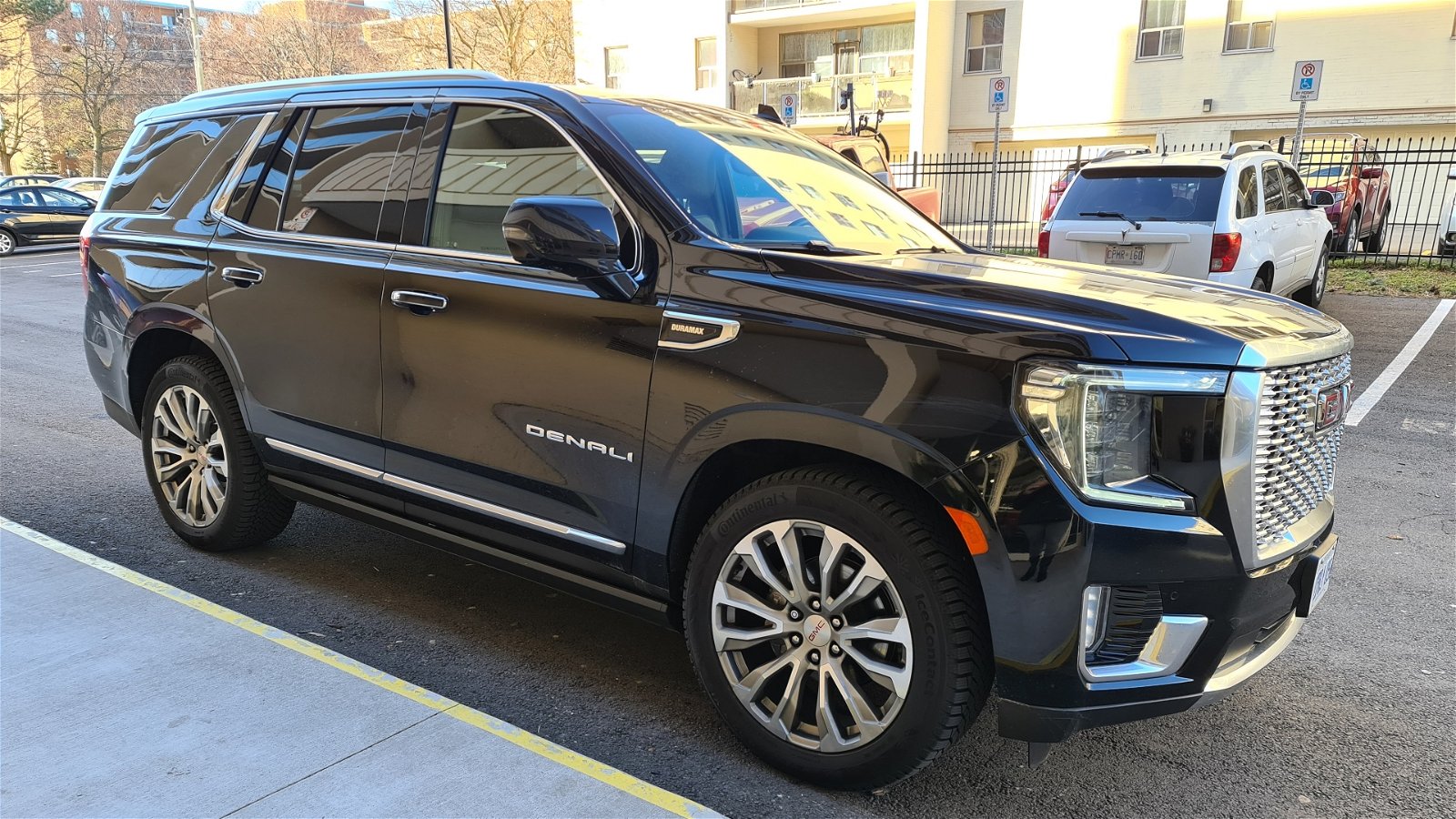 I’m an automotive type guy, in both games and in real life. I started playing Gran Turismo on the PS1 when I was 13; I got my diploma GT2 on the PS1 again, and more recently, Gran Turismo Sports on the PS4. I’ve never owned an SUV in real life, I’ve only owned cars, like the 2013 Honda Civic that I currently own. Now that I have kids, an SUV seems almost inevitable, so why not test drive one for a week and see how we do.

So when GMC approached us to see if we would like to test drive the 2021 GMC Yukon Denali, we obviously said yes! This particular model was the diesel power unit, but that was fine with me. I only had to put fuel in it once, and that’s the day we gave it back after a week of testing. GMC says the fuel tank holds about 24 gallons (~91 liters), but we didn’t have to put in even close to that amount.

Let’s start at the beginning and talk about size. The 2021 GMC Yukon Denali is huge. Like, both long and wide, huge. When I arrived at the dealership to pick her up, I remember thinking she was the biggest land-based yacht I had ever seen. With a length of about 210″ (17.5 feet) and a width (without the mirrors) of 81″ (6.75 feet), it was hard not to see it when I approached.

All that space translates to the interior as well. I’m pretty sure my Civic could have fit in the cabin with room to spare. One of the things I noticed first was the center console between the two front seats. It acts as a very comfortable armrest and offers a reasonable amount of storage. Not enough to store your purse or other bag, but more than enough to store your vehicle’s knick-knacks, like gloves, gum, etc. There’s quite a bit of distance between driver and passenger, so it almost feels like they’re in another world.

Going a little further with cabin space, the whole “trunk” is huge, especially with the rear seats folded flat. I could have easily stowed my hockey bag, golf bag and weekly groceries in the back without any issues. All that space translates to doing all your shopping in one go, instead of having to drop things off at home and leave. As a parent of two young children, this is an incredible feature.

In the rear seats, 5 in number, your passengers will certainly not lack legroom. The middle two are split bucket seats and have their own set of heated seat controls, as well as vents to control heart and/or cold. In the three rear seats, seated passengers will have access to 2 USB-C charging ports. All of this is a far cry from the Dodge Caravan my family had when I was a kid. Being able to charge your devices for every passenger except one (the rear center seat) is a total game-changer.

The real draw of this vehicle is the rear seat media center. I know what you’re thinking: “a lot of vans and SUVs already have folding screens, that’s nothing new”. Well, you’re wrong, and let me tell you why. The 2021 GMC Yukon Denali’s rear seat entertainment system includes two 12.6-inch screens, one mounted on either front seat head restraint. They can be split into two independent screens, displaying different content OR they can be unified to play the same content on both screens.

Gone are the days when kids couldn’t agree on what to watch for the trip. They can now watch their own programming at their leisure. That in itself would be a great feature. But GMC wasn’t done there. They added two individual HDMI input ports and two USB-C charging ports as well. So if you have, say, an Amazon Fire Stick, just plug it into one of the HDMI ports and use the in-vehicle Wi-Fi (yes, it has Wi-Fi) you can do Netflix watching for Kids, Crave, Prime Video or any selection of movies if you prefer to use a regular USB drive.

I feel like a game show host here, but whatever… That’s not all! Finally, GMC installed an electrical outlet, like the one you’d find in your home, so you can plug in a portable DVD player, a charging pad if you don’t have a USB-C cable handy, or, you can do what i did, bring your ps4 in the car and plug it in. In a total of 5 minutes, I had my PS4 running using the car’s electrical outlet, connected to the Wi-Fi hotspot, and playing online with no latency issues, or dropped frames at all.

I should note here that I first tried shutting down my PS5 to see if that would work, but it would shut down immediately after launching a game. I don’t think there is enough power coming from of the outlet to operate the PS5 properly. It worked perfectly on the PS4, so that’s still a plus. The PlayStation 5 draws a lot of juice, especially under load, so that’s no surprise, although it was a little disappointing.

“In a total of 5 minutes, I got my PS4 working using the car’s electrical outlet…”

Now, the Wi-Fi isn’t the best you’ve ever seen. I did a network test on the PS4 while connected, and it reported a download speed of between 6 and 10 Mbps. Not upsetting, I know. Just make sure your games, apps, etc. are up to date before you hit the road, otherwise you’ll spend the trip waiting for the download to complete instead of playing.

At this point, you’re probably thinking the rear-seat infotainment system is great, but what about the driver and passenger seats. Well, the 2021 GMC Yukon Denali features an 8-inch multi-color Driver Information Center. This touchscreen allows you to control almost every aspect of the vehicle from the comfort, and I mean the comfort, of the driver/passenger seat.

This touchscreen has just about every feature one can think of for a vehicle. Android Auto and Apple Car Play allow you to integrate your phone into the screen. Although after using Android Auto I don’t particularly care about it, mainly because your phone’s layout takes over the screen and you can’t use features like controlling the rear screens, unless you exit Android Auto. I liked pairing my phone via Bluetooth and using the screen as is, so much more.

“This touchscreen allows you to control almost every aspect of the vehicle from the comfort, and I mean the comfort, of the driver/passenger seat.”

Let’s talk about driving this yacht on wheels. There’s certainly no shortage of power, so getting the thing moving isn’t a problem. For a vehicle that has “only” 277bhp, it has absolutely no trouble getting up to road speed in a decent amount of time. As I mentioned earlier, the 2021 GMC Yukon Denali is a very wide vehicle, which means getting used to how much of your lane it takes up is a bit of a process. I can say there were a few times I looked at my driver’s side mirror and thought I had plenty of room before I crossed the line, but when I checked the passenger side mirror I was basically straddling the line! Apparently, I was still used to the size of my Civic.

Ride comfort was next level. There was plenty of softness in the suspension to provide a smooth ride, which is fantastic if you have kids who like to sleep in the car. I barely felt any bumps in the road, something I’m not used to in my Civic. For a vehicle the size of the 2021 GMC Yukon Denali, that’s quite an achievement. Especially when the Denali weighs around 5500 pounds, depending on which model you get. The model tested weighed less than 5,500 pounds, but it’s as close as that makes no difference.

With all that weight, you’d think it would handle like a yacht, but it didn’t. Despite its weight, the 2021 GMC Yukon Denali was able to maneuver nimbly around other vehicles in traffic, and the blind spot indicators on the side mirrors helped even more. The only issue I had maneuvering the vehicle came when I was trying to find a parking spot in a crowded parking lot. Parking when there are vehicles on both sides of the plaza made it difficult, especially when you have to park so far across the lane to be able to turn into your desired location. Let’s just say the turning radius for the Yukon Denali was surprisingly large.

“The only problem I had maneuvering the vehicle came when I was trying to find a parking space in a crowded parking lot.”

This vehicle is packed with features, all designed to make your driving experience better and more comfortable. One of my favorite features is the HUD that displays on the windshield for the driver. It is a transparent projection from inside the dashboard and displays your current speed and time to the vehicle in front of you. These make it easier for you to keep your eyes on the road than having to look inside the dash and are easy to read and understand.

That’s all well and good, but what does it mean in terms of price? Well, there’s no easy way around it, so here it is, the 2021 Yukon Denali starts at nearly $70,000. The model tested has a sticker price of around $79,000, and that’s for the diesel version. The regular gasoline model will add another $2,000 to the price. It’s a lot of money, no doubt.

It makes me wonder if it’s worth it, spending so much money for a vehicle of this size. There will definitely be people who like their vehicle to be that big, and that’s their prerogative. I prefer my cars to be a bit smaller and, for lack of a better word, subtle. If you have the money to spend on a vehicle of this size and capability, by all means, look into it. I just can’t justify it to myself.

GMC has made a great family vehicle in the 2021 Yukon Denali; you’ll never run out of space in this thing. Some of the features they added are really amazing. I never thought I could have a game console in my car and be able to play online while driving (disclaimer: I haven’t played while driving). I can’t get around the price.