RON’S GONE WRONG is a delight 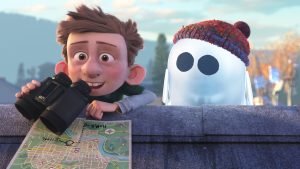 Barney (Jack Dylan Grazer) is a young man who finds college a great challenge. All the friends he had in elementary school seem to have moved on with their lives thanks to technology. Each of them has tech friends called B-Bots who learn all about their young users and allow them a wider range of social media. Created by CEO Marc Weidell (Justice Smith), there’s an algorithm in every B-Bot to make them pals with humans.

Everyone has one except Barney who is hoping to have one for his birthday. Papa Graham (Ed Helms) who sells new stuff online and Grandma Donka (Olivia Colman) try to throw a party with Barney hoping he’ll invite his school friends over. When they realize that won’t happen and what Barney really wanted for his day – daddy and grandma kicked off – well, sort of.

Speeding through town to the Bubble store where B-Bots are sold, it’s a side affair that causes Barney to wake up with a new friend. Thinking it’s the best thing, it only takes a little while before it becomes clear that something is wrong with this particular B-Bot. Picking up on him and knowing what will happen, Barney decides he’ll teach everything his B-Bot, now named Ron (Zak Galifianakis) needs to know.

An incredible friendship begins between Barney and Ron, but that doesn’t stop childhood friend Rich (Ricardo Hurtado) from getting started with Ron. Now a firestorm on social media. CEO Marc wonders what’s going on and while he’s not looking, maniac Andrew (Rob Delaney) tries to take his business and goes looking for Ron and Barney. While trying to escape, Barney meets Savannah (Kylie Cantrall) making her promise not to say he’s running with his friend B-Bot.

The hunt is on and some old friends decide it’s time to reconnect with Barney and the very interesting and lovable Ron. Reunited, Barney, Ron, Savannah, Marc, Rich, Dad, Grandma and Ava (Ava Morse) battle the bubble to find Ron. There comes a time when Barney must make a decision about what friendship really means to him.

Grazer who voices Barney is charming and understands situations so much that he knows they cannot be easily corrected. He misses his friends, his mother and a father who tries to do the best for his family. Once he meets Ron, he has someone to teach and care for, although Ron is very different from other B-Bots. Grazer lends his voice to a friendship that is endearing and says it all.

Galifianakis voicing Ron is so sweet, naive, full of wonder, hilarious and worth a smile as you watch him learn all there is to learn in Barney’s world. Give anyone watching a trip to Ron’s world, and it’s Galifianakis who shows us what friendship means to this little B-Bot.

Helms as Graham is a father who tries to support his family and forgets that sometimes providing means missing things. Ron isn’t clearly expressing his feelings and when Dad finds out he begins to wonder how to improve it for his boy. Colman as Donka is a grandmother who loves her family, loves her family history, and takes care of Graham and Barney. She’s also amazing at fixing the strangest things so that it always works, but that’s what grandmas do, right?

Smith as Weidell just wanted to create a friend for the kids, but when he sees someone taking advantage, he sides with Barney and Ron. It’s amazing that Weidell doesn’t see dollar signs, but instead sees the power of friendship. Delaney like Andrew wants everything Weidell has, including the CEO job and the potential to make billions.

Cantrall as Savannah was once Barney’s best friend, but with the introduction of B-Bots, she has become a social media butterfly. She sees what Barney is going through, but has to mind her own life to care for a friendship, until she experiences the other side with Barney. Hurtado as Rich is also a child social media influencer who records everything, it’s anything but the bullying he gives Graham. The sad part is that he was also once Barney’s best friend.

Other actors include Marcus Scribner as Alex, Cullen McCarthy as Noah, Thomas Barbusca as Jayden, Liam Payne as Bob, Ruby Wax as Mrs. Hartley and Flula Borg as Sarah.

Twentieth Century Home Entertainment offers award-winning global products and new entertainment on DVD, Bluray and Digital HD. This incredible collection offers fans the opportunity to expand their own personal libraries with the best movies. To find out what other titles they have please visit www.fox.com.

Walt Disney Studios Home Entertainment continues to provide quality programming for children and children at heart. Home of the most beloved animation features including SNOW WHITE, PINOCCHIO and SLEEPING BELLE AU BOIS, to name a few, is what keeps families coming back for more. To see what is currently available to add to your own family library, please visit. www.movies.disney.com for their At Home titles!

Bonus features include A boy and his B * Bot: When Jack Met Zach – Zach Galifianakis and Jack Dylan Grazer, the voices behind Ron and Barney, sit down to discuss a fun assortment of topics. From social media to skateboarding, the two actors from two very different generations tell us when Jack met Zach. Agree to Ron – Join the cast and crew behind the scenes as they reveal the skill, dedication and friendship it took to bring this film to life. From script writing to the voiceover booth, the artisans of Locksmith explain how they got to make Ron. Music video “Sun” – Song from the movie Ron’s Gone Wrong, performed by Liam Payne.

RON’S GONE WRONG is a delicious movie that comes out at a time when it’s so wonderful. The movie introduces us to tech-based friendship and reminds us how cool it is to put it aside every once in a while and step out into the real world. Barney wants a B-Bot so badly but quickly learns responsibility.

It is not just the responsibility of a B-Bot but to teach Ron what friendship means, how it is interpreted by an innocent person, and what the word “literally” means. Because, literally, Ron takes Barney at his word and there are consequences to the 6 foot rule of friendship. That being said, there are so many lessons here for the kids and my granddaughter’s eye lights up whenever the characters talk about things she was learning on her own.

Now THAT is just wonderful something for all of us.