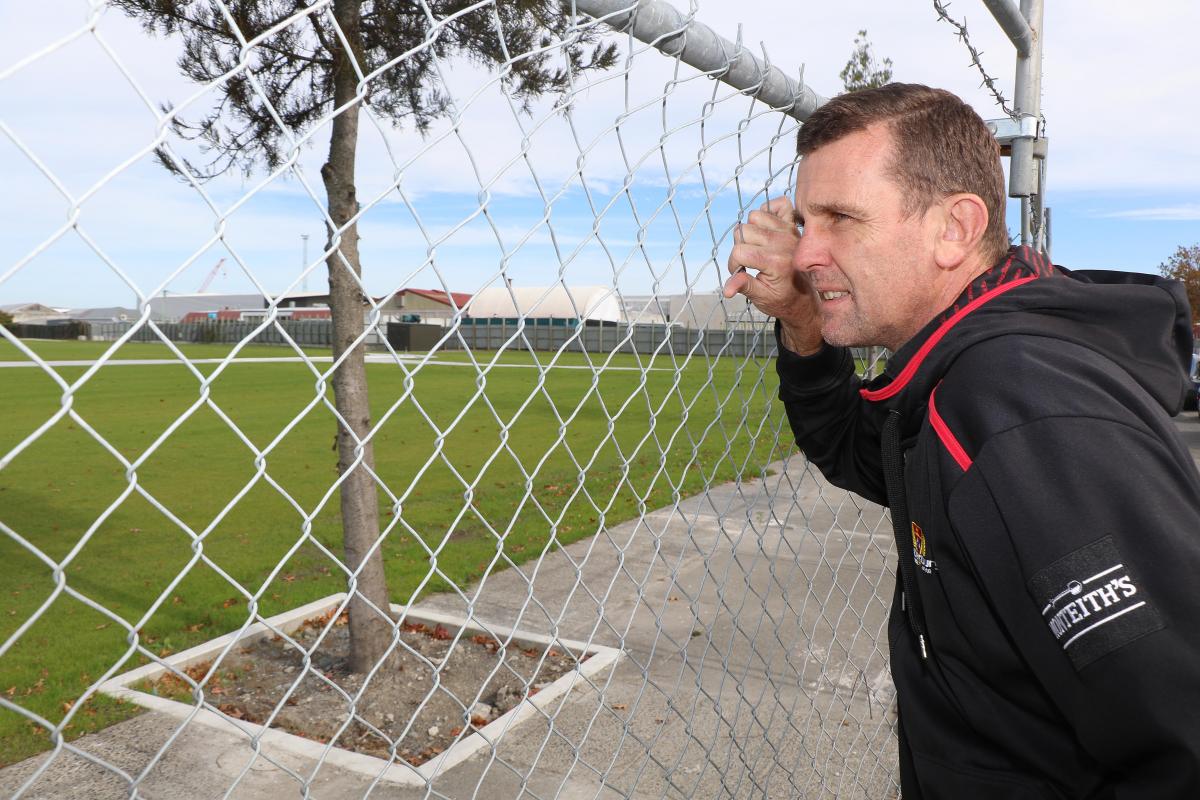 Lancaster Park has once again become a green space and now an adopted Cantabrian who has documented the history of the ground wants Christchurch’s new stadium to pay homage to its illustrious predecessor and to Canterbury rugby, through a museum. Shane O’Driscoll details his plan for Chris Barclay.

He hails from Timaru and supported Otago from the bank in that epic clash against Ranfurly Shield in 1994, but there’s no doubt that Shane O’Driscoll’s provincial allegiances lie in now.

‘It’s a good result, they did a good job,’ he said, looking through the fence at Stevens St, to the right of the barricade protecting the weather-beaten and peeling gates of the war memorial. , which are set to get a $500,000 makeover. .

Lancaster Park returned to green space after the liquefaction, an expansive lawn in accordance with its designation by the Lancaster Park Vesting Act 2008, which limits land use to sports, recreation and public gatherings.

Unlike Wellington’s Athletic Park, which now houses a retirement complex, Lancaster Park has been protected as a place of recreation, which has pleased O’Driscoll, who developed and runs the Lancaster Park Memories Facebook page and website lancasterpark.co.nz dedicated to remembering Christchurch Sporting Citadel.

The 51-year-old began his search as he used to run around the neighborhood when the land was slated for demolition.

“I’ve always studied rugby history regardless and felt the need to preserve some of those Lancaster Park moments. I felt like there was a bit of appeal there.

He was surprised to find that it was also a multi-purpose facility, like his eventual replacement.

“There was harness racing, cycling, hot air ballooning, jamborees and all that kind of stuff in the early days.

“He has such a varied history, it’s unbelievable. They tried everything… athletics, they had a squash court and a swimming pool.

With online research in place, O’Driscoll now has a new project in mind, driving the creation of a museum documenting the varied and storied history of the land.

Take a look at his blog entries at lancasterpark.co.nz and the final article revisits Pope John Paul II’s pilgrimage to the ground in November 1986, nearly a century earlier, gas lighting and a new asphalt track with a banked bend allowed the Pioneer and Christchurch cycling clubs to organize night meetings.

Rugby, however, would dominate a museum that would ideally take pride of place at the Te Kaha/Canterbury Multi-Use Arena.

O’Driscoll has an ally in the Canterbury Rugby Football Union Historical Trust, a dedicated group of wise old rugby leaders who spend Tuesdays collecting and cataloging relevant memorabilia in a room tucked away in Rugby Park’s aging stand.

He first witnessed the work of the trust last year and believes it deserves a wider audience, any audience.

“They have never found accommodation since the earthquakes. I started a project to help them find a place to display their stuff. They’ve had all the Lancaster Park programs since day one.

“They have so many memories, balls and shirts, programs and memories and none of it is on display. They are salts of the earth, all volunteers doing it out of personal passion.

Visitors to the Canterbury and Crusaders headquarters can see Super Rugby trophies in the lobby and other memorabilia; other historical documents are on display upstairs and in the offices.

O’Driscoll, who traced his adopted red-and-black roots to a post-graduate accounting position at another earthquake victim, the Canterbury Draft brewery, argues the trust’s inventory should be exposed.

“That’s where I’m headed. They need a patron for the idea and then you create a cause and get pledges and donations,” he said.

The city council must be on board, with O’Driscoll noting that a counterpart from Christchurch to Dunedin is playing a vital role in moving the New Zealand Sports Hall of Fame to a refurbished wing of the old station from from 1999.

Private sponsors also got the ball rolling before it opened in 1990.

“I think it’s a model that you could make work if the board had your back, and the obvious place is in the new stadium,” said O’Driscoll, who admitted the game plan needed work.

“In my mind, I’m a bit biased because I like all of this, but how big is the market? How many visitors would you have except on game day?

“It should be refreshed.

You couldn’t have the audience come in once and say, “I’ve been there.” You would need subjects and rotate it every six months. It would have to be made interactive with touch screens and that sort of thing.

When the ground, which opened in 1934, was redeveloped from 2006 to 2008, it incorporated a full stadium tour, museum tour, house entrance and outdoor dressing rooms.

Needless to say, Munster’s 12-0 victory over the All Blacks in 1978 is a focal point, a subject that will never be shot.

The general manager of City Council-owned Venues Otautahi, Caroline Harvey-Teare, said a museum could be included in the new stadium.

“There are plenty of spaces available which can be activated for attractions on match days and the main and main areas of Te Kaha could be used for more permanent retail rentals in the future. This could include a museum-style attraction, among other things,” she said.

“Once Te Kaha opens, the primary goal is for it to be a truly versatile facility that continues to be well used, loved and activated outside of sports and event days.”

O’Driscoll, who is not a fan of the Orangetheory stadium despite taking his daughter in the loss to the Blues on Good Friday, said the new stadium needed innovation to attract crowds as the Rugby’s appeal was waning, particularly under the lights outside of a decider.

“It’s a shame the way things are going with rugby and the crowds. Afternoon rugby where they would bring 30,000 to Lancaster Park seems like a world apart, doesn’t it?”

“There’s going to be quite an effort to bring them back to the new stadium,” he said.

Gary Tibbotts will be there without hesitation, preferably as a museum guide.

Once Covid-19 restrictions eased, Tibbotts was back to work at the east end of Rugby Park’s stand, sifting through dog-eared match schedules that date back to the 1930s. There are also videos and DVDs to organize.

“It’s a treasure trove of photos, DVDs, videos, broadcasts… rugby shirts, more than we can store. You name it, hopefully we have it.

Tibbotts, 78, would like to see their collection in a museum-style setting, so that the province’s proud rugby history is preserved for future generations.

“Guys like me would run it as volunteers. With my hand on my heart, I would accompany people and recall pretty much the entire history of each photo or exhibit,” he said.

“That’s what you need because today’s rugby people know very little about the history of Canterbury rugby.”

Tibbotts views audio and video presentations – he transferred a 16mm film of Canterbury’s 9-6 win over the Springboks in 1956 to DVD – as well as framed shirts and photos of lasting moments.

He said the trust is busy with inquiries from members of the public and former provincial officials.

“We’ve had Canterbury players and even All Blacks contact us and ask, ‘Do you have any pictures of me playing because my grandchildren don’t believe I played for the All Blacks’ .

“We are able to happily provide them, at no cost to them, with either a program or pictures or something about their career.

“People will contact us and say, ‘My father died a few months ago, we emptied the garage and we found a box of programs’.”

Tibbotts said the Canterbury Rugby Supporters Club and Referees Association had memorabilia in their rooms at Lancaster Park, which is now in the care of the trust.

“When the stadium was changed, a lot of the space in the referees’ room was used for company dinners and things like that. Before the earthquakes, a lot of these things were taken apart and never put back together,” he said.

After the earthquakes, memorabilia was originally stored at Wigram before Rugby Park space became available.

“We have the (original) Larry the Lamb outfit and it’s not just rugby memorabilia,” Tibbotts said.

There is a grainy image of skydiving balloonist David Mahoney ready for take off in 1899, a journey that ended in tragedy when the Aucklander – also known as Captain Lorraine – was blown overhead from the hills of Port and lost his parachute (there was no basket in those days).

He was last seen in the water near Port Levy, but his body was never found.