Section 119 welcomes a British invasion this spring with the launch of The Beatles collection! 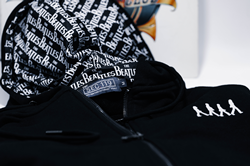 Gregg Carey, CEO and Owner of Section 119, said, “We’re absolutely thrilled to be working with the many Beatles artwork to celebrate the world’s most iconic quartet.”

Section 119 and Apple Corps will work closely together to create unique apparel and merchandise to celebrate the cultural and musical heritage of The Beatles, helping to expand the reach and impact of the band’s iconography with fans.

Section 119 will launch their new collection on May 19, 2022 and will be available at their official store – section119.com, Rock and Roll Hall of Fame and Beatles.com.

The upcoming collection offers perfect solutions for the beach to the office – running errands to events.

Designed to be worn untucked or tucked in, with contrast angled buttonholes to the front and a modern reinforced collar, this 100% cotton piece is sure to become a wardrobe staple for the most discerning fan.

Gregg Carey, CEO and Owner of Section 119, said, “We are absolutely thrilled to be working with the many Beatles artwork to celebrate the world’s most iconic quartet. Just binge Get Back with the rest of my team, our appreciation for their artistry, innovation and commitment has brought credit to what we do. We look forward to building a timeless clothing offering for years to come. Surely there is inspiration for a lifetime that we can work on.

Joe Marziotto, Vice President of Branding and Licensing at Thread Shop, said, “We look forward to a very successful partnership with Section 119 to celebrate The Beatles with their fans across North America. I can’t wait to see their very cool clothing capsule in May!

Section 119 is an online e-commerce store dedicated to building unique licensing partnerships with bands and artists, pairing iconic imagery with unique, stylish, high-end apparel for all occasions. Born out of a now-defunct custom costume store, due to covid, brick and mortar in New York City, Section 119 has really focused on e-commerce since 2019.

Apple Corps Ltd. was founded by the Beatles in 1968 to oversee the band’s own creative and business interests. As part of its stewardship of the entire Beatles intellectual property canon, the London-based company has administered the legendary band’s recorded catalog, with over 800 million physical and digital albums sold to date.

In 2016, Apple Corps partnered with Imagine Entertainment, White Horse Pictures and Polygram Entertainment/UMG to release the Grammy®-winning feature-length documentary, The Beatles: Eight Days A Week – The Touring Years, directed by Ron Howard. In January 2019, Apple Corps and WingNut Films Ltd. have announced a new feature film collaboration between The Beatles and director Sir Peter Jackson. The new film will be based on never-before-seen studio footage of the Beatles, shot in January 1969.

As part of Apple Corps’ first major theatrical partnership, The Beatles LOVE by Cirque du Soleil® has staged 6,000 performances for 10 million viewers since opening in June 2006 at the Mirage in Las Vegas. LOVE of the Beatles has also spawned a Grammy®-winning double album and Grammy®-winning feature film, All Together Now, which details the compelling story behind the unique partnership between the Beatles and Cirque du Soleil that resulted in the creation and launch of love.

The Beatles made their worldwide streaming debut on December 24, 2015 with the band’s 13 UK studio albums and Past Masters (Volumes 1 & 2), The Beatles 1962-1966, The Beatles 1967-1970 and The Beatles 1, followed by The Beatles’ Anthology, Music Collections Volumes 1-3 and the LOVE album. Beatles songs were streamed over four billion times in the first two years.

And continuing the commitment to preserve the archives and legacy of the Beatles catalogue, feature films The Beatles’ Help!, Yellow Submarine and Magical Mystery Tour have been painstakingly digitally restored in recent years for release on DVD, Blu-ray ™ and iTunes. .