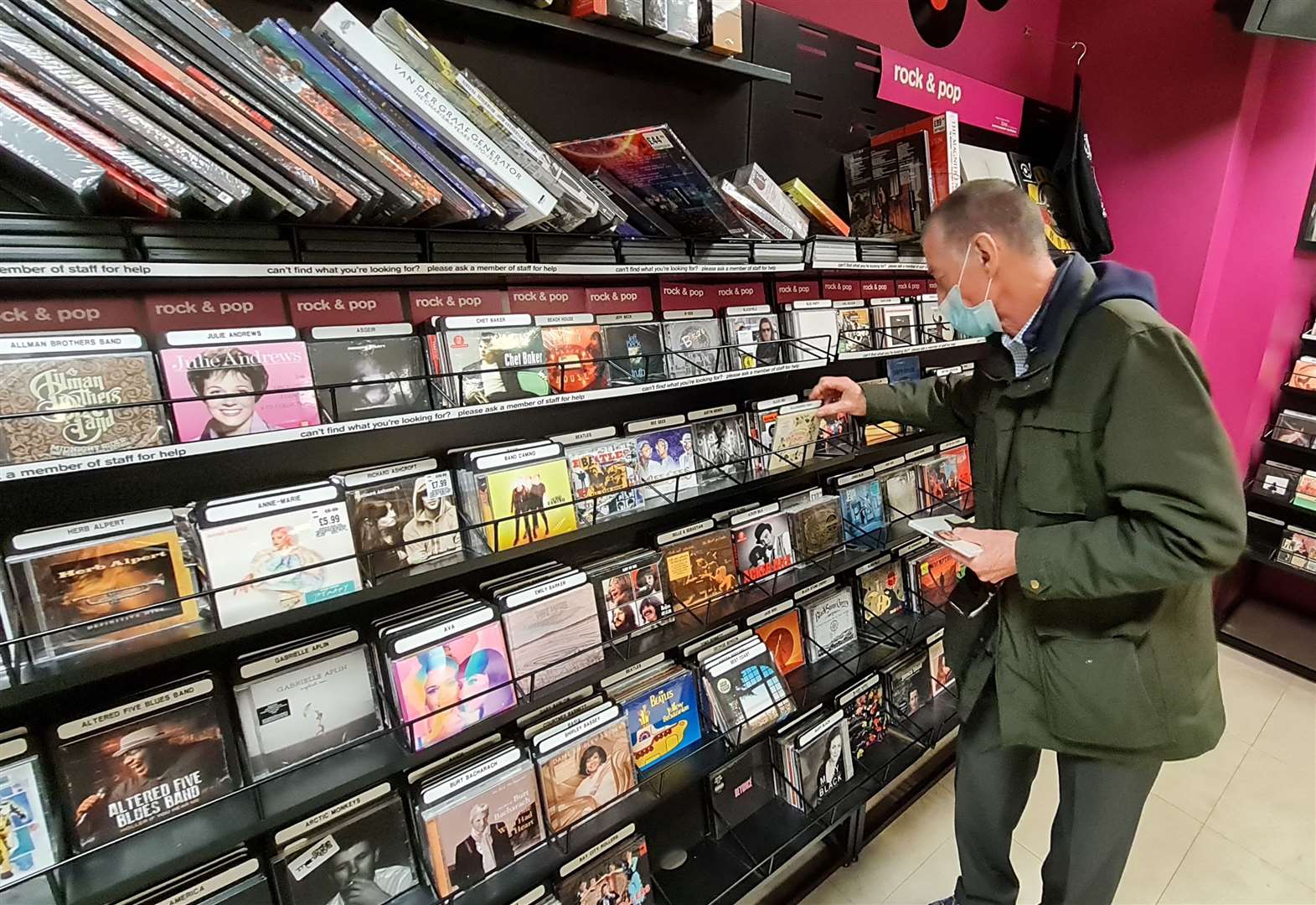 One of Kent’s few remaining HMV stores closed yesterday after more than 20 years on the same site.

Before it closed, ahead of a move to smaller premises, journalist Gerry Warren walked into the Canterbury shop to see how the business is still surviving in the age of streaming services and downloads….

Like many, I suppose, I haven’t ventured into an HMV branch in years.

If I want to listen to the latest music, I use Spotify; if I want to watch a new hit movie, I turn on Netflix or Amazon Prime.

So in this new age of downloads and streaming services, how do stores selling racks of CDs and DVDs survive?

When it opened in 1999, Canterbury’s HMV was one of the city’s busiest stores, attracting hordes of film buffs and music fans as it brought pop culture to the high street.

For many, each visit to the store was an experience; an event to savour.

Teenagers piled in after school, spending an age listening to music on headphones scattered around the two-story store, and often left without parting with cash.

But they would return when their pocket money piled up, ringing the tills of a retailer at the top of its game.

Those same checkouts would be packed at Christmas, as the store became a one-stop-shop for many of the sought-after gifts on their lists – CDs, DVDs, iPods, posters.

But where is the market for it now?

CDs and DVDs are almost redundant in this new digital world. Meanwhile, most of the latest gadgets can be picked up online at lower prices and delivered to your doorstep.

It’s no surprise, then, that the Canterbury store was relatively quiet when I visited the day before it closed.

Among the few customers was Jim Williams, 79, who appears to be on a mission to keep HMV in business.

“I still love CDs and together with my wife we ​​have about 1,300,” he said, clutching an Aled Jones album but insisting he’s a fan of all of them. genres, including heavy metal.

“I just downloaded them to my computer and the quality is very good.”

Maybe he hasn’t heard of Spotify.

Jim says he has visited the Canterbury store since it opened and is relieved to hear that HMV will retain a presence in the city when it closes, in a unit in Whitefriars.

But he’s likely to find a very different — and hopefully better — experience in the new, smaller store.

Upon entering the current premises, I encountered a rather run-down workshop, although I gave the staff some time as they were clearly preparing for the move.

Going through the myriad of lockers and shelves, it’s hard to know exactly where what is. The problem is that there aren’t many ways to view CDs and DVDs. But then again, browsing titles and stumbling upon something unexpected also has its appeal.

A wide variety of merchandise is also on offer, including TV sets and music and film memorabilia, like Harry Potter scarves, Marvel figurines, T-shirts, mugs – you can buy a Batman water bottle for 19, £99 – posters, calendars and books.

There are also record players and headphones, and you can even buy a Bat Cave doormat to amuse visitors to your house, or a pair of “Rocky” boxing gloves for sparring matches with the nightmarish neighbors.

Many pop and rock superstars are represented, although I’m not sure I’ll part with £24.99 for a Sergeant Pepper or Pink Floyd t-shirt.

And you’d need to be a serious Michael Buble fan to shell out £179 for his special box set.

Looking around, I can’t help wondering how much I could buy cheaper online.

On a rack, sharing pride of place with Adele’s new album, I saw a DVD of the latest Bond film, No Time to Die, for £9.99.

Sounds like a bargain, especially with the masks currently mandatory for cinema releases, but a quick Google shows it available for £7.99 from Globalstore.

There’s no doubt that for movie buffs and music fans, there are merchandise out there that could serve well as birthday treats or stocking stuffers.

But the store feels dated and short of any Hollywood glitz, which the new store will hopefully provide if it is to avoid adding its name to the long list of branches that have closed over the past decade. .

During this period, the company has survived administration twice, most recently in 2018, when it was rescued by a Canadian investor.

But the shrunken business continues to fight for survival against all odds, with bosses seemingly optimistic about its future.

Last year plans were announced to open 10 new stores in the UK, despite the challenges facing the high street.

“Nothing can replace talking to someone face-to-face who is as passionate about what you buy as you are, and our stores provide a real sense of community for music, film and TV fans. “, said the company last year as it celebrated its 100th anniversary.

Meanwhile, vinyl sales are up 11.5% year-on-year – but will this niche market be enough to sustain business?

HMV must once again become the go-to place for music and film, and the culture that goes with it, by making its stores as welcoming as possible.

But only time will tell if it hits the right note with buyers and survives for many years to come.