Where have my rentals gone? Locals miss DVD rental – The Blue Banner 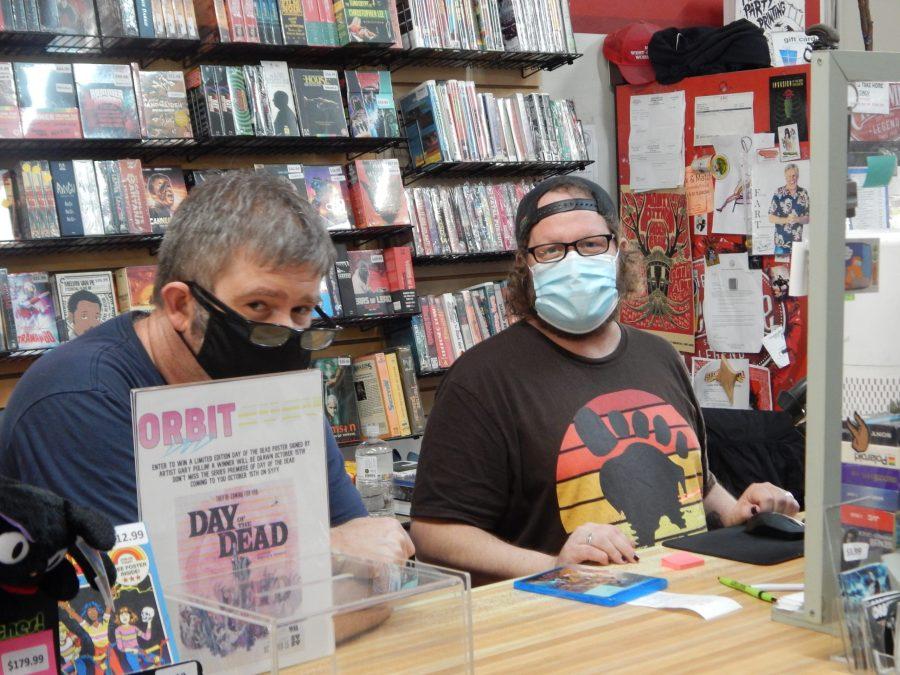 Orbit DVD on Haywood Road remains one of the last remaining video stores in Asheville and many are wondering what happened to their rental section.

According to Orbit DVD employee Danny Blaire, the store has been a core business in the Asheville community for years and it’s no surprise that more and more people are asking about rentals.
In light of this, Blaire said he sympathizes with local moviegoers but urges them to understand that Orbit DVD is no longer just a video store. Although rentals are popular, they only accounted for about 3% of their sales.
“Physical media is back for sure,” Blaire said. “I think for some people you never know when something is going to come out of the stream.”
Due to the growing interest in video games and memorabilia, Orbit DVD’s priorities have shifted and are now allocating most of their resources to their growing digital market.
According to Blaire, more and more customers are turning to Orbit DVDs for video games, collectible toys and other hard-to-find merchandise, with some of the special edition items costing over $ 200.
Blaire said despite the popularity of rentals, the service isn’t making enough money to make it a priority.
“We just started the website in quarantine because we weren’t open to in-store purchases,” Blaire said. “Since then, we’ve gone from a small brick and mortar store in Asheville to an international shipment.”
Increasing sales on their website are forcing Orbit DVD employees to work hard to revamp the store to meet growing inventory.
According to Blaire, they run into the possibility of having to increase their space.
Blaire said one of the biggest challenges with this change is figuring out where to put all of the rental DVD cases in the middle of Orbit DVD’s expanding video game section.
“We had to expand our video game section because it exploded so much,” Blaire said. “The entire back room is now devoted to video games, whereas previously there were only empty DVD cases for rentals.”
In addition to finding more space in the store, Orbit DVD employees haven’t forgotten about rentals and are completely reworking their rental system with the goal of making it easier for customers to use in the future. .
According to Orbit DVD employee Tye Krebs, some customers have contacted him confused by the change in focus at Orbit DVD and wondering if the store could close its doors, thus cutting off the rental service.
Krebs said he wanted to assure customers that Orbit DVD was booming and that he planned to bring rentals back at some point.
“Maybe in a year,” Krebs said.
As a fun place to rent videos near campus, Orbit DVD was a popular haven for UNC Asheville students.
According to Han Henson, a UNCA graduate and frequent Orbit DVD customer, he misses the rental at Orbit and can’t wait to see what steps the store will take to bring their rental section back in the future.

Henson said he was proud of the final project produced by his group in their final year in his new media class and was eager to share it with everyone he could. Henson’s senior project, which was created with UNCA graduates Alejandro Figueroa, Gabby Broadman and Zach Weston-Farber, was a 30-minute parody of a children’s TV show originally recorded as a VHS tape. , but was also burned on a few DVDs.
“We used video, puppetry, graphic design, two-dimensional and three-dimensional animation, and Adobe After Effects work,” Henson said.
Before the COVID-19 pandemic forced Orbit DVD to shut down for a while, Henson’s group chatted with some of Orbit DVD’s filmmaking employees and showed them the video they have created.
According to Henson, the employees have shown a genuine interest in his group and their work. Impressed with their video, Orbit DVD staff allowed Henson to put a copy of the project in the back for rent.
Henson said Orbit DVD support was a boon to him and was happy to let them rent the video.
“We never received any money or asked for money to keep our job there,” Henson said. “It was just a fun way to take it out and I felt like a part of us had been immortalized in the city.”
However, the current lack of rentals not only affects Orbit DVD staff and customers, it also affects students whose videos could potentially be rented.
According to Henson, he has enjoyed renting Orbit DVD videos for years and thinks the rental situation is unfortunate.
Henson said that if Orbit DVD doesn’t rent out right now, no one will be able to see their movie.
“I could always ask for recommendations and have a fun movie night,” Henson said. “Now I can buy DVDs from them, but it’s a little harder to buy a movie you’ve never seen before. ”