The growing importance of Blu-ray explains why a device to extract audio from an HDMI stream has become necessary. At first, Blu-ray players had HDMI outputs for video and audio, but to hasten their adoption, they also sported analog audio outputs to help users who had older AV receivers (AVRs). Goodbye, those audio outputs have been reduced. First the multi-channel sockets, then the stereo sockets and finally the S/PDIF sockets were removed. At the same time, dedicated SACD players are starting to disappear, except at the very top of the range. The result: most players, including so-called universal disc players that handle CDs, DVDs, Blu-rays and often SACDs, only output HDMI.

If you want to get audio output, HDMI is the only way. Those of us who want to play discs on our dedicated audio systems, few of which are HDMI compatible, have long sought out breakout boxes to extract audio from the HDMI stream. Those legacy drives with other outputs won’t last forever.

HDMI audio extractors aren’t new, but most are cheesy gimmicks aimed at users of older, non-HDMI AVRs and they rarely support lossless multichannel. The AudioPraise VanityPRO ($1595) is different. It comes from two companies, AudioPraise and JVB Digital, with a long history of high-end audio and video editing. Some readers will know them best as a map source to modify Oppo disc players to output multi-channel digital. The VanityPRO was developed to extract a digital audio signal from the HDMI stream and optimize it for playback on a high quality audio system. Once audio is freed from the constraints of HDMI, there’s a lot you can do.

The AudioPraise VanityPRO comes in several versions. The version I auditioned had an output module with four AES3 (XLR) stereo outputs supporting up to eight audio channels. This multi-channel version is also available with four electrical S/PDIF outputs with RCA or BNC connectors. The version with the stereo output module, which costs the same, comes with AES3, S/PDIF over RCA and TosLink, one of each. Unless you anticipate needing this kind of output versatility, it makes sense to buy one of the multi-channel versions, since with a stereo source, two-channel audio is output via the first digital output. But of course you can’t do multichannel with the stereo version.

VanityPRO’s HDMI and audio data sections are powered separately, each with its own power supply. The two sections are said to be galvanically isolated. You can buy the VanityPRO without PSUs (provide your own) or with one of three that add between $55 and $65 to the price. The VanityPRO is sold online at jvbdigital.com with free shipping and a 14-day in-home trial.

In the May 2020 issue of stereophilic, I reviewed the GeerFab Audio D.BOB,2 digital breakout box which can extract the DSD stream from an SACD player and output it as DoP. The VanityPRO can do this too, but it can also convert the stream to PCM through processes that significantly reduce signal jitter and noise. An AudioPraise white paper describes the issues, signal processing, and results, with both traditional and newer methods of jitter testing. They don’t state this explicitly, but AudioPraise implies that their approach is superior to simply packaging DSD data into a DoP package. At the very least, it obviates the need for a DSD-capable DAC while also enabling downstream DSP.

I connected an XLR cable from the AES3 output of the VanityPRO to an input of my Okto dac8 PRO or, alternatively, the Mytek Brooklyn DAC+. Since the VanityPRO isolates its HDMI circuit from its audio circuit, I connected the two supplied mini power supplies to the VanityPRO’s two power inputs.

The VanityPRO offers several options for processing and outputting extracted audio. Let’s start with the simplest and progress to the most complex and interesting.

DSD extraction and DoP output
I started with the Oppo playing an SACD, sending stereo DSD via HDMI to the VanityPRO; the VanityPRO was sending it to Mytek as a DoP. Operation was flawless and sound was similar to that coming from the Oppo’s analog outputs. I saw no evidence that the VanityPRO was doing anything to the data stream other than wrapping it in a DoP carrier. The Mytek (via the VanityPRO) sounded at least as good as the Oppo straight from the disc.

The cheaper GeerFab Audio D.BOB can also do this. But the VanityPro can do more.

DSD or PCM ripping and PCM output
I went back to the audio setup screen, disabled DoP and replayed the same SACDs I used for the DoP test. Now the Mytek showed PCM 24/176.4 as data format instead of DSD64. I had also invoked VanityPRO’s option to match the PCM and DoP output levels by attenuating the PCM by 3dB, so I was able to make fair A/B comparisons between the two. I had the constant feeling that the PCM output was clearer, more articulate and a bit more dynamic. This is exactly the kind of feeling one would get if there was a slight level imbalance in favor of the PCM, but there wasn’t; I have checked.

Additionally, with PCM data (from DVD, DVD-A or Blu-ray discs), Dolby Digital and HD and non-HD dts are played at their native bitrates and benefit from the DACs of the Mytek or Okto dac8, a distinct advantage. than the analog outputs of the Oppo. The VanityPRO does not support any compressed, lossless or lossy formats, so the disc drive must be set for PCM output.

DSD or PCM, DSP ripping and playback
That’s not all the VanityPRO can do, assuming you have the necessary associated equipment. The AES3 output (and S/PDIF outputs if you get the stereo version) can be connected to a PC-based audio processor for DSP and other operations. After being processed, it can then be edited in real time or stored.

I connected the VanityPRO to an AES3 input of my Okto dac8 and used its USB connection to direct the stream to JRiver running on my Baetis server. The JRiver output was routed, via USB, to the Mytek; it could have been directed to any terminal or reader, connected directly or by LAN. One could also run it the other way around, with the Mytek sending PCM data to JRiver and his output going to the Okto or another DAC, although I haven’t tried that. What I did to do was to run this option with the input and output routed through the Okto in its “AES/USB” mode.

This is the most exciting application for the VanityPRO. It provides the ability to apply DSP, channel-level adjustments, active crossovers, and room correction when playing records, without redundant D/A–A/D conversion. It’s a pleasure to run DiracLive – to balance channels and compensate for room acoustics – not only with files but also when playing discs. Very cool.

Multi-channel
And now the icing on the cake: the VanityPRO can do all of the above on up to 8 channels (just like 7.1)! As noted in the specs sidebar, the VanityPRO I received (at my request) has four stereo AES3 outputs, which I can feed into similar inputs on the Okto dac8 Pro. A U-DIO8 miniDSP or a stack of Brooklyn DAC+ would also do the trick. For the latter, the VanityPRO offers clock outputs that can be daisy-chained through the Brooklyns to keep all low-jitter signals in sync. 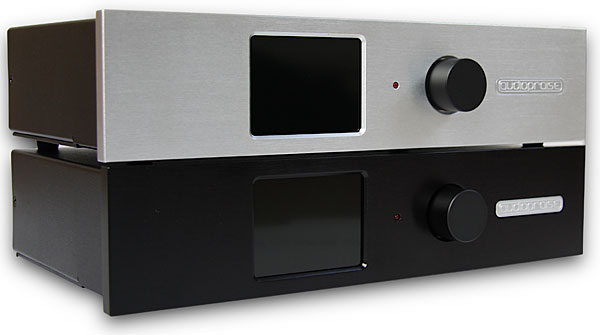 For some time I’ve been listening to new records with Oppo’s multi-channel RCA outputs feeding my otherwise balanced system. without DSP, to decide if I want to extract them for my library. I could only appreciate them in all their DSP glory after they were ripped apart. With the AudioPraise VanityPRO, I can now enjoy all the benefits of DSP without tearing up first.

Finally: The VanityPRO includes yet another feature that will be welcomed by quad fans: an option to properly downmix DSD 5.1 to 4.0, a task that eludes many AVRs.

Straightforward conclusion
Whether stereo or multi-channel, the VanityPRO turns your disc player into a transport medium and improves the quality of output from all discs, including CDs, DVDs, DVD-A, Blu-ray, BD-A and SACD. Did I miss something?

Footnote 1: eARC support is supposed to be coming soon, which will allow direct connection to a smart TV.