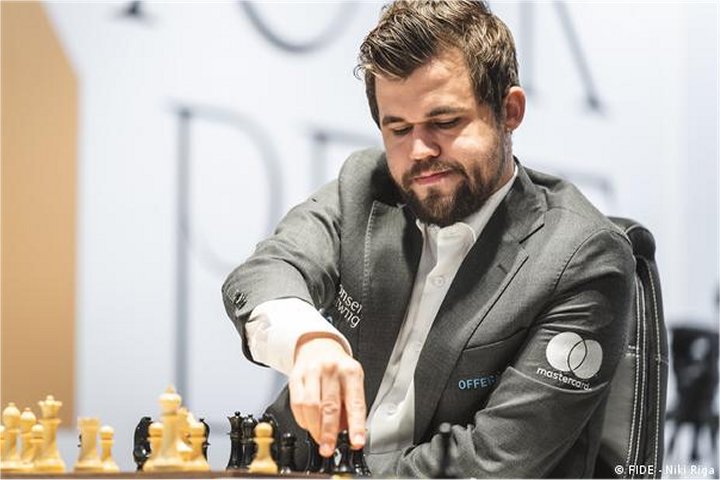 During the World Championship match against Ian Nepomniachtchi, Magnus Carlsen regularly gave interviews to his friend Magnus Barstad. Now, after the match, Carlsen threw a bombshell in a podcast with Barstad which appeared in Norwegian on the site of Carlsen’s sponsor Unibet:

Carlsen said he has been thinking all year about whether the world championship game in Dubai should not be his last. The title didn’t mean as much to him as it once did, Carlsen said. But added that after Firouzja’s convincing victory in the Swiss Grand Tournament in Riga and his impressive performance at the European Team Championship, he found the idea of ​​playing a World Championship match against the young Frenchman quite attractive.

But if anyone other than Firouzja wins the Candidates Tournament, it would be highly unlikely that he will defend his title again, Carlsen said.

Carlsen said he found the goal of achieving an Elo rating of 2900+ much more motivating, and said he was also looking forward to competing in the World Rapid and Blitz Championships at the end of the year. .

It is well known that Carlsen is a friend of short and very short time checks. When Carlsen in one of the games against Nepomniachtchi had just 26 minutes left for ten shots, commentator Anna Muzychuk said: “This shouldn’t be a problem for Carlsen. He sometimes plays 27 games in 26 minutes. “But only online,” added Vishy Anand, who was commenting with Muzychuk.

Shortly before the start of the World Championship match, Carlsen, aka Dr Nykterstein, was playing ball chess on Lichess as a warm-up. Mikhail Botvinnik, world champion from 1948 to 1963 (with interruptions), would probably shake his head in wonder in such a way of preparing for important events. Botvinnik once claimed that he had only played one game of blitz in his entire life and often took extended breaks from chess tournaments.

In the past, Carlsen has more than once criticized the current format of World Championship matches. He would rather fight for the title in knockout tournaments, he said. He also pointed out that more and more matches between the top players ended in draws and suggested playing with shorter time checks.

It’s probably fair to say that Carlsen is a gamer who loves the thrill you get in games with short time controls. A long World Championship game creates another form of tension, opening preparation plays a much more important role and a single mistake can be fatal. It is very different in rapid or in blitz. You can play almost any opening and you can take a lot more risk. What Carlsen sometimes likes to do. Most of the time this approach works for him because he is a very strong and fast player. And after one of his rare defeats, he knows he can just play a new game.

Carlsen has played in the World Championship before against Caruana, Karjakin and Nepomniachtchi, and having to play these players again doesn’t promise much fun. Perhaps it was a glance at the roster of possible challengers that spoiled Carlsen’s appetite for the next World Championship game.

This match is expected to take place in 2023. In 2013 Carlsen became world champion and in 2023 he will retain the title for almost ten years. It’s a long time, and only four of the 16 world champions in chess history have had a longer reign: Emanuel Lasker, Alexander Alekhine, Mikhail Botvinnik and Garry Kasparov. Anatoly Karpov’s reign as world champion spanned ten years, from 1975 to 1985. Incidentally, being the world champion with the longest tenure would also be a laudable goal. To break Lasker’s record, Carlsen would have to remain World Champion until 2040. He will then be 50 years old. At that age, Kortschnoi was still playing for the title.